Days were only 17 hours long, due to different dynamics between our planet and its satellite. 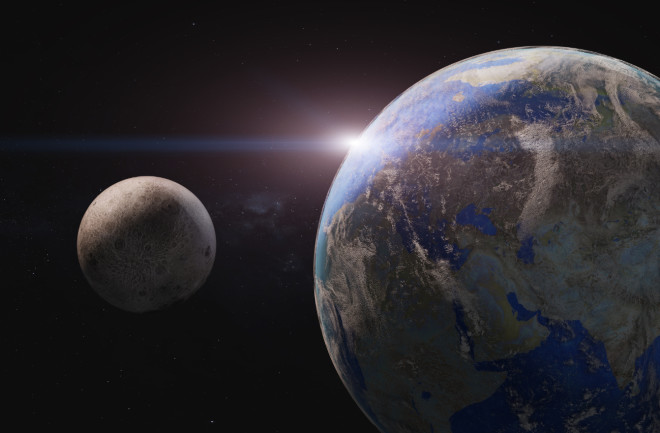 Research recently revealed that the Earth and Moon had a much closer relationship about 2.5 billion years ago: The Moon orbited nearer our planet, and Earth’s spin was much faster.

“It’s possible to get this information about the Earth-Moon dynamics, and also the solar system, by looking at old rocks,” says Margriet Lantink, a post-doctoral earth scientist at the University of Wisconsin-Madison and lead author of the latest study. “It’s really cool.”

Of course, researchers couldn’t say for sure the distance between even the modern-day Earth and the Moon until we first reached the satellite half a century ago. At that time, astronauts put reflectors on the Moon that could be seen from Earth. By monitoring their distance over time, scientists determined that the Moon is moving away from us at a rate of about 3.8 centimeters per year on average — due to a gradual decrease in tidal energy that decelerates the Earth’s spin on its axis.

The trouble is, it would be impossible for this rate to have been the same throughout history. “The present-day rates at which the Moon is moving away is too fast for what it could have been over the entire history,” says Lantink, adding that the Moon would have hit the Earth as recently as 1.5 billion years ago if that were true.

Previous researchers used methods like the examination of ancient fossil bivalves to learn more about ancient Earth-Moon dynamics. Because these creatures grew tiny new layers each day, scientists could analyze the layers to estimate the number of days in a year.

Other methods included the examination of tidal deposits over time to determine the number of days in a lunar month. These kinds of clues can help us estimate how close the Moon was to the Earth on average, and how fast the Earth was spinning. But none of these methods were very reliable, Lantink says.

She and her colleagues wanted to improve reliability — and stretch the evidence back even further. In their latest study, published in the Proceedings of the National Academy of Sciences, they turned to ancient rocks in northwestern Australia. Rocks in the Joffre Member of the Brockman Iron Formation there date back to roughly 2.46 billion years ago, and regular changes in the composition of the rocks can reveal changes in the climate patterns at that time.

These climate patterns fall within the Milankovitch cycles, a group of three periodic changes that are caused by the Earth’s movements. The first is called climatic precession, and it influences the direction the Earth’s axis of rotation is pointed. These days, this cycle lasts about 21,000 years.

The second cycle is related to gradual changes in the Earth’s inclination, or obliquity. This cycle lasts about 41,000 years. Finally, the eccentricity cycle involves changes in our planet’s elliptical orbit around the Sun. The shorter version of these cycles lasts roughly 100,000 years.

Each causes changes in the distribution of sunlight hitting the Earth — and these traces can be seen on ancient rocks, similar to the way that tree rings reveal the cyclical nature of the seasons in a year.

Cyclical patterns in the rock layers at the Brockman Iron Formation revealed that about 2.46 billion years ago, the climatic precession cycle was a whole lot shorter than the 21,000 years it takes today.

Researchers tended to believe that elliptical cycles haven’t changed much during the past 2.5 billion years because they are related to other factors independent of Earth-Moon dynamics. But the Australian rocks show that precession cycles were much shorter back then.

During a single 100,000-year period of an eccentricity cycle, for example, Lantink and her team found nine precessional cycles. That means that each precession cycle would have lasted only about 11,000 years. Based on this shorter length, the researchers calculated that the Moon was roughly 200,000 miles from the Earth, on average, 2.46 billion years ago. This is much closer than the 238,855-mile average distance today.

Read More: Earth’s Moon: The Basics of its Origin, Evolution and Exploration

Based on these findings, Lantink says that the length of the Earth’s days were also shorter (as there’s a direct relationship between the precessional movement of Earth’s axis and the rotational speed of Earth spinning on its axis). Though there were still 365 days in a year, each day would have been only 16.9 hours long.

In case there remains any doubt, another study recently used models to predict ancient lunar orbital evolution, rather than examining ancient rocks. Those researchers found similar results to Lantink’s study. Together, both studies are revising what we understand about Earth-Moon dynamics billions of years ago, she says.

3753 Cruithne: The 'Second Moon' You Didn't Know Earth Had

Totality Touches The Moon During The Lunar Eclipse