A study shows that the Egyptian mummy is adorned with 49 precious amulets, some in the shape of specific body parts. 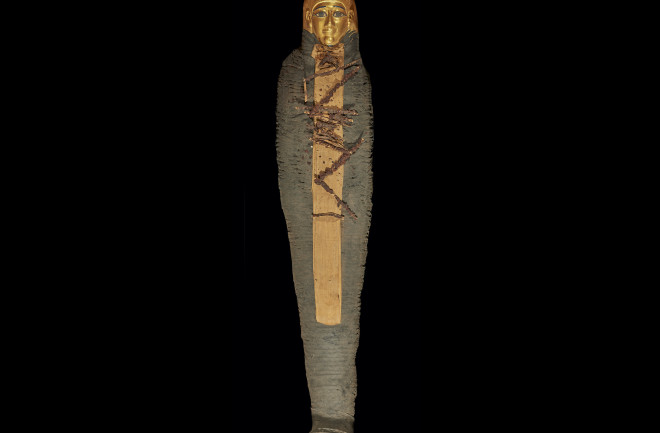 Ancient Egyptians went through a lot of linen when they wrapped up their lost loved ones. Winding long strips of the material around their torsos and their appendages — and sometimes around their individual fingers and toes — these wrappings were intended to protect and preserve the dead during their transition to the afterlife.

But what was woven within and underneath these layers of linen?

According to recent research in Frontiers in Medicine, the “digital unwrapping” of an approximately 2,300-year-old mummy solves this age-old secret. Research reveals that the mummy retained an abundance of precious amulets, placed within and underneath its wrappings both on and inside its body. The researchers report that the mummy provides one of the best demonstrations of ancient Egyptian beliefs about death and dying.

The ancient Egyptians approached death as a transition to another world, whereupon the spirit would separate from the mummified body of the deceased and proceed toward a perfect form of the deceased’s previous life. That said, this trip to the afterlife was far from simple or straightforward, featuring an arduous final journey and judgment, where only those who were deemed worthy were allowed to forge ahead.

As such, specialists say that the living attempted to aid the deceased through this transition by decorating their bodies with protective amulets and talismans. The items' abilities to protect the dead depended not only on their shape, size, material and decoration, but also on their placement.

Read More: The Mummification Process: How Ancient Egyptians Preserved Bodies for the Afterlife

To acquire additional insight into this practice of adornment, three researchers recently turned to the mummified body of a wealthy teenage boy from 2,300 years ago. The mummified body was sitting in the basement of the Egyptian Museum in Cairo, untouched since its discovery in 1916. Utilizing their “digital unwrapping” technique, the team ultimately determined that this "golden boy" mummy was armed with 49 amulets, several in the shape of body parts such as the heart and the tongue.

“Here we show that this mummy's body was extensively decorated with 49 amulets, beautifully stylized in a unique arrangement of three columns between the folds of the wrappings and inside the mummy’s body,” says Sahar Saleem, a study author and a professor of paleoradiology at Cairo University, according to a press release. “Many were made of gold, while some were made of semiprecious stones, fired clay or faience. Their purpose was to protect the body and give it vitality in the afterlife.”

Amulets For the Afterlife

Turning to computerized tomography (CT) to image the inside of the "golden boy" mummy, the researchers determined that the teen was between 14 and 15 years old when he died, with no clear cause of death besides natural causes.

Read More: Are the Egyptian Pyramids Aligned with the Stars?

Much more strikingly, the team found an assortment of 21 distinct types of amulets, including a golden tongue amulet positioned inside the mouth and a golden heart amulet positioned inside the chest. According to the researchers, the golden tongue allowed the boy to speak in the afterlife, while the golden heart silenced his heart, which was thought to protect the deceased during their final judgement.

In fact, though mummies from this time tended to lack almost all of their internal organs, they typically maintained their hearts, which were perceived as the center of a person's consciousness. According to the Book of the Dead, the principal funerary text of the time, though the heart was imperative in the transition to the afterlife, the organ occasionally testified against the deceased during their final judgement, if not properly silenced by the addition of an amulet.

Read More: Who Built the Egyptian Pyramids? Not Slaves

Other talismans were positioned on or inside the body to bring the deceased balance and bodily protection in the afterlife. In addition to these amulets, the deceased also sported a gilded mask, a wreathe of ferns and a pair of sandals, the latter of which was probably intended to allow the spirit of the teen to arise from its two separate coffins and travel toward its final destination.

The Reason Why 2,000-Year-Old Roman Concrete is Still so Strong

More From Discover
Health
Walking vs. Running Benefits: Should You Walk or Run for Exercise?
Health
What is the Purpose of Hiccuping?
Mind
Gut Bacteria's Role in Anxiety and Depression: It’s Not Just In Your Head
Mind
Can Playing Video Games Make You Smarter?
Health
Is Vitamin C Actually an Effective Cold Remedy?
Health
Why Walking Might Be One of the Best Exercises For Health
Recommendations From Our Store
My Science ShopDiscover STEM Kits
My Science ShopDiscover 2022 Calendar
My Science ShopStrange Science
My Science ShopElements Flashcards
Shop Now
Stay Curious
Join
Our List