The North Sea is filled with thousands of wrecks from World War I and II, and a study shows that some of these wrecks are still spewing toxic substances into the seafloor. 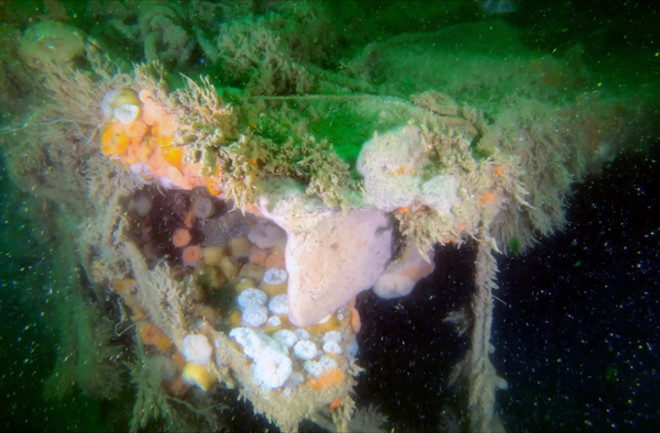 The torn deck of the V-1302 John Mahn is covered in microbial colonies (Credit: VLIZ).

Situated between Great Britain, Germany, Belgium, Denmark, Norway and the Netherlands, the North Sea contains an assortment of artifacts from the two world wars. And according to a paper published in Frontiers in Marine Science, one of these artifacts — a sunken ship from World War II — still pours pollutants into the floor of the sea almost a century after it sunk.

Specialists say that the floor of the shallow North Sea is strewn with thousands of ship and aircraft wrecks and assorted artifacts from World War I and II. These wartime wrecks, they say, can contain toxic chemicals and cargo, including millions of tons of ammunitions and explosives, that taint the marine environment and ecosystem. That said, scientists still struggle to understand the true extent of the effect that these wrecks could cause.

"The potential environmental impact of these wrecks is often overlooked," says Josefien Van Landuyt, a study author and biochemistry student at Ghent University in Belgium, according to a press release. "While wrecks can function as artificial reefs and have tremendous human story-telling value, we should not forget that they can be dangerous, human-made objects which were unintentionally introduced into a natural environment."

Launching an investigation under the North Sea Wrecks project, Van Landuyt and a team studied one such wreck, the V-1302 John Mahn, which the Germans deployed as a patrol boat before it sank off of the Belgian coast during World War II in 1942. Aiming to see whether the wreck still impacts its immediate surroundings, the team sampled and analyzed the surrounding seafloor. Their study revealed that the wreck is still spoiling the nearby sediments, as well as shaping the nearby marine microbiology 80 years after being submerged.

"People often forget that below the sea surface, we, humans, have already made quite an impact on the local animals, microbes, and plants living there and are still making an impact, leaching chemicals, fossil fuels, heavy metals from — sometimes century old — wrecks we don’t even remember are there," Van Landuyt says in a press release. "Although we don’t see these old shipwrecks, and many of us don’t know where they are, they can still be polluting our marine ecosystem."

To assess whether the V-1302 John Mahn shipwreck still pumps pollutants into the sea, the team took an assortment of samples from the sediment surrounding the ship.

The samples suggested that the sediment contained a plethora of pollutants, at many concentrations, depending on the samples’ initial distance from the shipwreck. These pollutants included poisonous metals such as nickel and copper, as well as arsenic and an assortment of chemicals contained in coal, crude oil and gasoline. They were also strongest in the samples taken nearest to the ship.

According to the team, these pollutants can cause significant damage to their surroundings — damage which isn’t diminishing with time as one might presume. In fact, the corrosion that’s naturally occurring as the V-1302 John Mahn continues to sit at the seafloor is splitting open more and more spaces of the ship, potentially increasing the polluting power of the wreck.

The team’s analysis of the sediment samples also addressed the microbial activity around the ship. They identified an abundance of varietals of bacteria such as Rhodobacteraceae, Chromatiaceae and Desulfobulbia, which disintegrate chemicals in coal, crude oil and gasoline or diminish sulfates. And the team surmised that the ship is not only continuing to pollute, but is continuing to alter the microbial colonies in its immediate vicinity.

"Their environmental impact is still evolving," Van Landuyt concludes in a press release. "We only investigated one ship, at one depth, in one location. To get a better overview of the total impact of shipwrecks on our North Sea, a large number of shipwrecks in various locations would have to be sampled."

Asexual Reproduction is Surprisingly Common in the Animal Kingdom