Hundreds of Mysterious Strands Cross Through the Center of Our Galaxy

Astrophysicists are uncertain about the origin of these strange patterns, but they might be connected to the black hole at the center of the Milky Way. 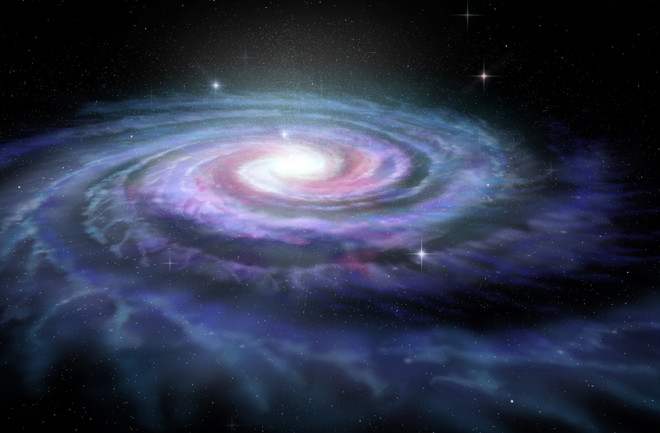 Radio telescopes have captured the most in-depth images of hundreds of filaments that stretch through the center of our galaxy. These mysterious strings sometimes span more than 150 light years in length, occasionally grouped in patterns.

“Some of them are beautiful — they show up like harp-shaped strings next to each other,” says Farhad Yusef-Zadeh, an astrophysicist at Northwestern University who led a recent study published in The Astrophysical Journal Letters on the strands.

But researchers are still unsure about the cause of these features in the cosmos. “The big question is: What is the origin of these filaments?” Yusef-Zadeh says. “The puzzle is still there and the mystery continues.”

One hypotheses suggests they might be related to the black hole at the center of the Milky Way, which was captured in an image for the first time ever this week.

Yusef-Zadeh first discovered these filaments in the 1980s using radio wavelengths picked up by the Jansky Very Large Array, a facility in central New Mexico run by the National Radio Astronomy Observatory. At the time, the instruments only revealed roughly 80 of these space strands.

But recent images were captured with MeerKAT, a radio-telescope array run at the South African Radio Astronomy Observatory by the South African government. MeerKAT revealed 10 times more filaments than Yusef-Zadeh had discovered.

“[MeerKAT] can observe the nucleus of our galaxy 12 hours, 13 hours a day,” Yusef-Zadeh says. In total, the array spent about 200 hours observing these strands. Yusef-Zadeh ended up piecing together 20 different observations from different sections of the sky to get a fuller picture of what was happening 25,000 light years away in the center of our Milky Way galaxy.

The initial observations in the 1980s revealed that the strands are composed of cosmic ray electrons that gyrate the magnetic field at nearly the speed of light. Researchers don’t know why or where they came from.

“How do you get electrons accelerating to such high energies?” Yusef-Zadeh says.

The longest of these filaments is about 163 light years, or 50 parsecs, meaning 50 times the distance measured between our sun and the next nearest star. The shortest is a few parsecs long.

Researchers now know that changes in radiation coming from these filaments are quite different from something that would be caused by a supernova. But the strands appear to be particles losing energy as they move through space. We don’t yet know if the strands are getting longer or shorter, for example, or changing overtime, which could mean they trail behind some moving object like the tail of a comet.

Yusef-Zadeh has a couple running hypotheses on what might have caused these strange patterns.

Since they aren’t caused by a supernova, it’s possible instead that the strands are connected with past activity by the black hole at the center of the Milky Way. An outflow might have ejected material from the black hole in the past, and these strands could be the trace of this material. Or past outflow from the black hole might have interacted with other objects in its path, creating these traces. It could also be that the highly turbulent environment of the center of the Milky Way has created these strands.

The first direct image of the Milky Way's supermassive black hole shows an orange glowing ring — gas heated as it fall into the singularity — with the shadow of the black hole at the center. (Credit: EHT Collaboration)

“You need a powerful engine to accelerate particles from such high energies,” Yusef-Zadeh says. But the observations haven’t yet revealed any such compact source that might show where these traces originated from, if that’s indeed what they are. If this is the case, then the particles would occasionally lose energy over time. Future observations of the same strands could reveal whether or not they are moving, and what speed they are traveling.

The newer images from MeerKat revealed that some of the filaments group together in patterns, seemingly from the same origin, while others are out by themselves separate from other strands.

Another possible source is a large bubble structure that emits radio waves, something Yusef-Zadeh and his colleagues discovered near the center of our galaxy in 2019.

The clustered filaments are especially compelling as they are regularly spaced from each other, with roughly one parsec between them. This kind of pattern draws questions about whether they are the trace of some sort of purposeful design — something like the contrails of spacecraft flying in formation, for example. But this sort of speculation isn’t something to be taken seriously among scientists at this point.

“The network of different groupings is intriguing,” Yusef-Zadeh says. “But certainly [these speculations] are sci-fi.”