Snowflakes take on many different shapes, sizes and characteristics, but why? 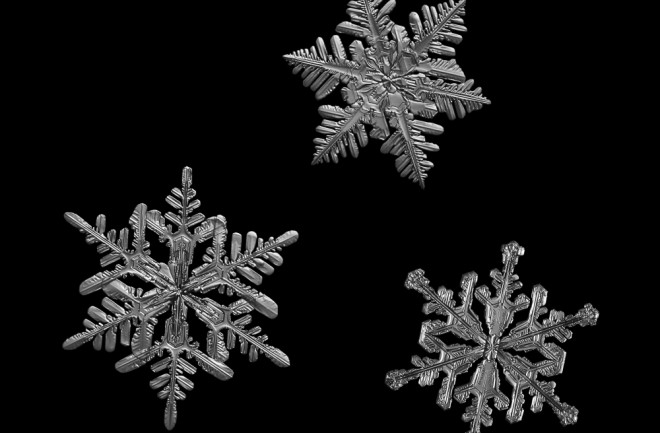 A sure sign of winter, particularly in cold-weather regions, is snow. Love it or hate it, these intricate ice crystals fall to the Earth as unique snowflakes and blanket the ground.

Snowflakes are a composition of up to 200 ice crystals. These crystals are created when a cold water vapor droplet becomes frozen to a pollen or dust particle. While the crystal is falling, other water continues to freeze onto the crystal — enabling new crystals to build and the snowflake to form.

It is believed that no two snowflakes are exactly the same — though there is still some debate on this. Although they may look very similar — even when studied under a microscope, the molecular and atomic composition will never be identical. This is due to deuterium, an isotope of hydrogen.

Generally, the ratio is one deuterium atom to every 5000-6500 hydrogen atoms. Because the number of deuterium atoms varies in each snowflake, as does their placement within the ice crystal — no two snowflakes can be identical. Factors, including temperature, speed, path and humidity, affect each snowflake’s unique shape as it forms while falling toward the ground.

2. The Discovery and Study of Snowflake Characteristics

Between 1885 and 1931, photographer and self-taught Meteorologist William Bentley photographed thousands of snowflakes. He designed a gadget that included his camera, a microscope, wheels and strings, allowing him to capture more detailed images of snowflakes.

His pioneering photography and observations of snowflake features led him to the conclusion that no two snowflakes were alike. After he published an article about this topic, it led to the acceptance of the idea. His book Snow Crystals was published in 1931, shortly before he died — and is still in print today. Because of his work, he was known as “Snowflake Bentley.”

Each water molecule of a snowflake has one oxygen atom and two hydrogen atoms, with a 104-degree angle between them. As water molecules bond with one another, the edges of the crystals start to protrude — exposing them to saturated air and leading to the familiar six-sided snowflake shape. Even though most snowflakes are classified as hexagonal, there are a variety of shapes they take. The most common types are:

4. They Vary in Size

A Montana ranch owner spotted the largest snowflake on record in 1887. It was 15 inches wide and eight inches thick. For a snowflake that big to form, there would have had to be little to no wind — along with high moisture content in the air. Otherwise, the snowflake would not have continued to gather frozen water droplets and ice crystals as it fell toward the ground.

Snowflakes can also be incredibly small and look different from how we think a snowflake typically appears. These tiny snowflakes are called diamond dust, and when seen in sunlight, they sparkle. They are hexagonal prisms found in extremely cold weather — including the Arctic, Antarctica and occasionally Canada and the northernmost portion of the U.S.

5. Snowflakes are Not White

To the naked eye, snowflakes appear white. But they are, in fact, clear. Although not transparent like glass, they are translucent. This means that light indirectly passes through.

The crystals act like prisms, reflecting the light spectrum and making the snowflake appear white. If you look at high-quality photography of snowflakes, you can not only appreciate their natural beauty but see how clear they are. In actuality, all snow is clear, despite looking white most of the time. When snow is tightly compacted, it will look blue. If there are algae on it, it will take on an orange, red or green hue. In comparison, dirt and other impurities in snow lead to a yellow or gray color.

How to Play in the Snow…For Science!