This adorable rodent might hold the key to slowing the aging process in humans. 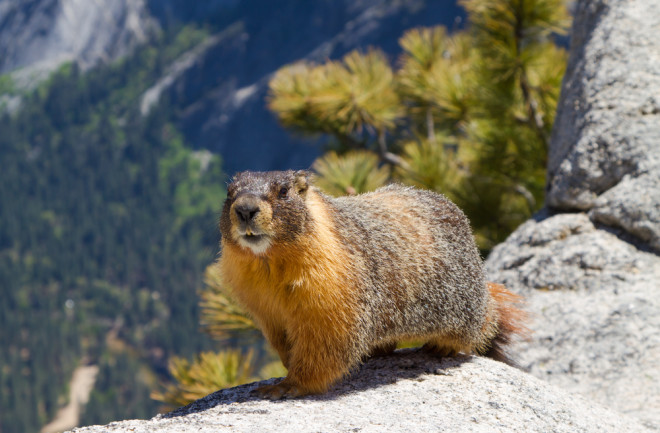 Every April, in the mountainous forests of Colorado, a fuzzy creature with a belly the color of buttered toast emerges from its snow-covered burrow. For the past eight months, the yellow-bellied marmot has been hibernating, existing in suspended animation to survive the bitterly cold winter. Although months have passed, the marmot is the same age — biologically speaking — as when it entered its den in early fall, a new study has found.

Scientists have long known that hibernation has anti-aging effects that go way beyond your typical beauty sleep. Turkish hamsters that spend more time dormant tend to live longer. Briefer bouts of hibernation among black bears are associated with the disintegration of telomeres, the protective caps on the ends of our chromosomes that dwindle with age.

But how does hibernation promote longevity? One theory suggests that by staying tucked away, hibernators are at less risk of predation and less exposed to pathogens, allowing them to survive longer than non-hibernating species of a similar size. While this certainly plays a role, scientists at the University of California, Los Angeles (UCLA) believe that hibernation itself can stop aging in its tracks.

The team tracked wild marmots over their lives, camping out in the field to record birth dates as pups emerge from their burrows. By taking regular DNA samples, the researchers measured how the marmot’s biological and chronological ages differed.

Biological aging refers to the accumulation of cellular damage in response to environmental insults and natural wear and tear. In most people, it closely mirrors chronological age and can be accurately determined by the pattern of chemical tags at various sites of the genome.

These tags, known as DNA methylation marks, are reshuffled as we age, fading from some sites and piling onto others, like drifts of snow. These markers are one type of heritable change, known as epigenetic modifications, which act like a dimmer switch to control gene expression. The migration of epigenetic tags over time is so persistent that it can be used to predict a person’s chronological age within just a few years.

The researchers discovered that during marmot hibernation, DNA methylation slows down dramatically. Only when the marmots crawl out of their burrows do their biological clocks start ticking away, extending their lifespan beyond that of a similarly sized non-hibernator.

When marmots hibernate, their body temperature plummets to just a few degrees above freezing and their metabolism wanes. “They burn a gram of fat a day,” explains study supervisor Daniel Blumstein, professor of ecology and evolutionary biology at UCLA. “For a five- to six-kilo animal, that’s incredibly efficient.” To the untrained eye, it’s difficult to tell whether the hibernating marmot is still alive since they barely breathe, sipping air just once a minute, Blumstein says.

Marmots aren’t completely lifeless during hibernation. In fact, they cycle between two-week periods of inactivity (or torpor), sprinkled with several hours of arousal, says Gabriela Pinho, who carried out the research as part of her doctoral thesis at UCLA. As hibernation comes to an end, the spells of arousal lengthen, Pinho says.

The transition between torpor and arousal is thought to trigger cellular events linked to aging, including oxidative stress, and the accumulation of highly reactive chemicals that damage DNA and cellular structures. Successful hibernators may suppress these actions and slow the aging process, the study authors suggest.

What’s more, the features of hibernation — an almost non-existent metabolism, a lack of food and low body temperature — have all been linked with longevity and reduced risk of age-associated disease. Understanding how these processes extend lifespan could help develop therapeutics to promote healthy aging in humans.

But the most immediate medical application is in the field of cryonics — freezing organs for transplantation. Cryonics appears to prevent the rearrangement of DNA methylation marks in tissues, says study supervisor Steve Horvath, a professor of human genetics and biostatistics at UCLA. This way, organs remain viable until a recipient is found.

Marmot hibernation has otherworldly applications, too. NASA is investigating how to mimic the features of hibernation in other organisms — so-called synthetic torpor — in animals and eventually human crewmembers for long-term space missions. If we ever send astronauts on lengthy voyages outside of our galaxy, we may have the yellow-bellied marmot to thank.