Cyanobacteria is what you call the algae you see on lakes and the ocean, and scientists are realizing there is potential to treat some human diseases like cancer and Alzheimer's. 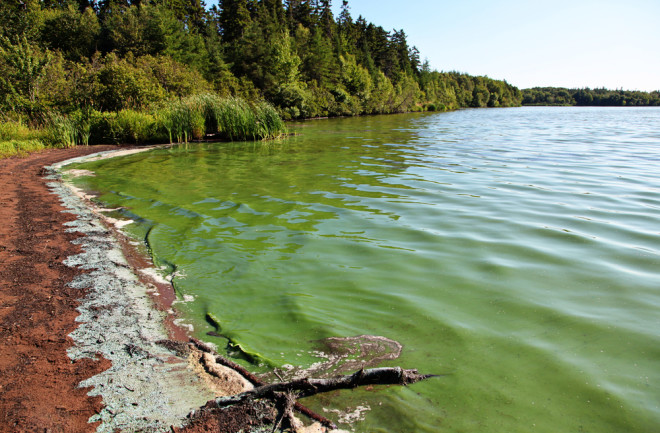 You may have noticed the common blue-green algae on a lake, or a substance that people refer to as “pond-scum.” This algae layer is actually a type of bacteria called cyanobacteria, which can be visible to the human eye in other colors such as pink or red.

Cyanobacteria are also found in the ocean, on cliffs, rocks, hot springs and in other extreme environments. They’re ancient organisms — dating to about 3 billion years ago — and they are the original source of oxygen we breathe today, says William Gerwick, a professor at Scripps Institution of Oceanography and the Skaggs School of Pharmacy and Pharmaceutical Sciences at the University of California San Diego.

While cyanobacteria can also produce certain toxins that can pose direct threats to humans and animals, there is also a new possibility that the bacteria could treat human disease, according to Nicole Avalon, a NIH National Research Service Award postdoctoral fellow at the Gerwick lab.

“It's those same chemicals that we're looking at for their potential utility in such diverse areas as anticancer treatments, antiparasitic and anti-inflammatory agents,” says Gerwick.

Avalon hopes to discover new drugs from cyanobacteria to treat cancer and other conditions such as traumatic brain injury, Parkinson’s and Alzheimer's disease.

Cyanobacteria is currently used in one type of drug called an antibody-drug conjugate (ADC). Clinics use this for treating cancer, but it can also potentially be used for other conditions like parasitic or bacterial infections. The drug is a “so-called warhead molecule” that connects to an antibody and the warhead is directed to cancerous cells, malaria parasites or whatever needs to be killed, Gerwick explains.

“The main warhead molecule that's used in five drugs in the clinic today are coming from cyanobacteria,” Gerwick says.

Dolastatin 10 is the potent chemical compound discovered from a marine cyanobacterium that inspired the main ADC cytotoxic warhead molecule. Dolastatin 10-based ADCs have been approved for treatment of different lymphomas and refractory bladder cancer.

Gerwick has looked at thousands of natural products but noticed cyanobacteria had the most pharmaceutical potential. Others might agree. Researchers at the University of Florida discovered a compound from a cyanobacteria off the coast of Florida called gatorbulin-1 (GB1). The study says the compound binds to a new site of tubulin, which is an important target for cancer drugs.

Another compound with anti-cancer potential from cyanobacteria is known as apratoxin F.

“[It] works to kill cancer cells by a pretty unique mechanism that no other approved anticancer medication works by,” Gerwick says.

Gerwick hopes that this new mechanism can treat certain cancers that aren’t responding to other medications. While the compound showed efficacy in mice models in a cancer laboratory at Henry Ford Hospital System in Detroit, there’s much more that goes into this process.

A compound might show potential anticancer activity in lab studies, but some compounds are overly potent and can cause an undesired effect, such as damage to the host cell, Avalon says.

Another challenge is having enough of the drug to use for a clinical trial. And cyanobacteria is important for reasons beyond just human health, Avalon says.

Avalon is now looking at cyanobacterial genomes to try and produce other compounds, specifically ones that can target secondary neuronal injury following a traumatic brain injury, or Parkinson’s, Alzheimer's disease and other neurodegenerative diseases.

One of the compounds was discovered from cyanobacteria several years ago and is called gallinamide A. This compound is an inhibitor of enzymes that break down proteins. Research indicates that cathepsin B and L play a role in the development of certain brain disorders. Comparably, inhibition of cathepsin B and L have been shown to have direct implications on neuronal outcomes following brain injury and in neurodegeneration, Avalon says.

“The goal is to identify new inhibitors that target these two proteases. A promising compound could lead to the development of a medicine that would directly impact secondary neuronal injury," Avalon says.

Despite this potential, Avalon stresses her research surrounding cyanobacteria is just at the beginning. It can take decades of work to isolate the structure of a molecule, fully characterize the structure and then identify a bioactivity worth pursuing.

Avalon is aware of this time-consuming process, but she says it’s worth it. “Recognizing that past successes have had very direct implications for human health is a massive motivator for me. If I can play a small role in contributing to a drug getting on the market, that would be very incredible,” Avalon says.

To Gerwick, who has been studying cyanobacteria for around 40 years, these marine organisms are “beautiful creatures” with more potential than what meets the eye.