How Our Sense of Taste Evolves and Adapts

Children are naturally attracted to sweets, but our palate changes as we age and experience new foods. 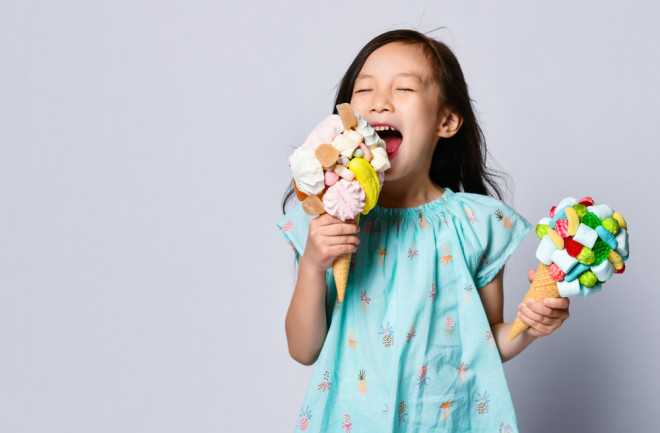 In 1980, a candy company launched a new gum aimed at kids. Big League Chew sold a pouch of shredded gum that was meant to resemble chewing tobacco. It came in original flavor, grape and sour apple.

Big League Chew was just one of many sweet treats that kids enjoyed in the 1980s and 1990s. Another popular confection, Nerds, were flavored sugar crystals coated with liquid corn syrup.

People who grew up during these decades might have fond memories of these flavors. But it’s also unlikely they would enjoy trying these treats today. Taste receptors are designed to evolve and adapt to the environment around us, and our preferences change as we age. Scientists are learning more about our changing tastes, but also what problems can arise when medicines mute our senses.

A person typically has about 10,000 taste buds located on their tongue, as well as the sides and roof of their mouth. Within each taste bud are individual cells that each have between 30 to 50 taste receptors. These cells have a short life span, and replenish about every two weeks.

There are four basic tastes we can detect — bitter, salty, sour and sweet. Receptors for each of these tastes are located throughout the tongue. Until the 1990s, some scientists adhered to the “tongue map,” which said parts of the tongue were designated for specific tastes. It said the tip of the tongue, for example, was more receptive to sweet tastes. However, studies found receptors for each taste are spread throughout the tongue, and the chorda tympani (anterior) and glossopharyngeal (posterior) nerves are responsible for mediating tastes.

How we encode these tastes with meaning is an individual experience. Scientists have found our encoding process changes overtime, and memory and perception shape it.

The kid who ate the contents of their Halloween haul in one sitting isn’t doomed as a sugar fiend for life. Scientists have observed that babies and toddlers show a strong preference for sweet tastes. This preference was once an evolutionary advantage. Sugar from fruit or honey was a quick source of complex carbohydrates. And fruit that was sweet and ripe gave a person more nutritional value.

The preference for sweet wanes in late adolescence. And older teens and people in their early twenties discover they no longer care for grape flavored Big League Chew or strawberry Nerds.

As we age, however, we become less reliant on a food item’s taste profile. Our memory and perception enable us to try, and even like, new food items.

“As we grow and get exposed to different flavors, there is a lot of learning going on. We associate different tastes with different consequences,” says Nancy E. Rawson with the Monell Chemical Senses Center in Philadelphia.

This evolving palate, Rawson says, allows a person to adapt to environmental changes, in which certain foods might be unavailable or new foods are introduced.

“Our senses are remarkable. They are constantly changing throughout our life,” Rawson says. “This allows the system to react to the environment so it can stimulate the right kind of behavior.”

Similar to how our skin cells replenish less robustly as we age, Rawson says our taste cells also diminish as we age. For women, taste cells begin atrophying and reducing in number after age forty. For men, the change starts in their fifties.

The sense of smell also dwindles as a person ages. Much of a flavor’s sensation comes from the aroma, and losing this sense can diminish a person’s pleasure. These changes, however, are gradual and not significant. Rawson says a person can adapt and enjoy tasting food and eating throughout their older years. The problem is when certain medications interrupt taste cells.

More than 250 medications are known to affect smell or taste. These medications include antibiotics, cholesterol and blood pressure lowering drugs and anti-inflammatories. A person doesn’t need a prescription to encounter a taste reducing drug. Fluticasone, an over-the-counter allergy medicine, can cause smell and taste disturbances.

Various medications can also cause a person to have a metallic or bitter taste in their mouth. Phantogeusia, or the sensation of a taste without a stimuli, can result from many common medications. Biguanides, for example, are used to treat diabetes and can cause a distortion of taste. Even topical medications can have an effect. Dorzolamide eye drops, for example, are used to treat glaucoma. But they can create a bitter taste in about 25 percent of users’ mouths.

Other drugs can make taste harder to decipher. Enalapril, which is used in treatment for high blood pressure, as well as heart failure, makes it harder to taste sweets.

Studies find there are consequences for people who no longer can smell or taste their food. While some are at-risk for losing weight and suffering nutritional deficits, studies have found people with muted senses are at greater risk for obesity. The lack of perceived flavor prompts them to eat more or seek satisfaction in higher fat foods.

“I think that is something that doctors aren’t tuned into, but can have a bigger impact on quality of life, diet and nutritional health,” Rawson says.

More From Discover
Health
Is 'Expired' Milk Safe to Drink? Here's How to Know When to Throw Away Food
Health
How Saliva Changes The Flavor Of Food
The Sciences
The Domino Effects of a Global Food Shortage
Health
What Factors Matter Most For Weight Loss?
Health
4 Science-Backed Diets to Improve Your Health
Health
Beer Hops May Fend Off Alzheimer’s
Recommendations From Our Store
My Science ShopDiscover STEM Kits
My Science ShopDiscover 2022 Calendar
My Science ShopStrange Science
My Science ShopElements Flashcards
Shop Now
Stay Curious
Join
Our List