The cyclonically-rotating cloud feature moved across the East Pacific Ocean in mid-November, roughly midway between Hawaii and California. 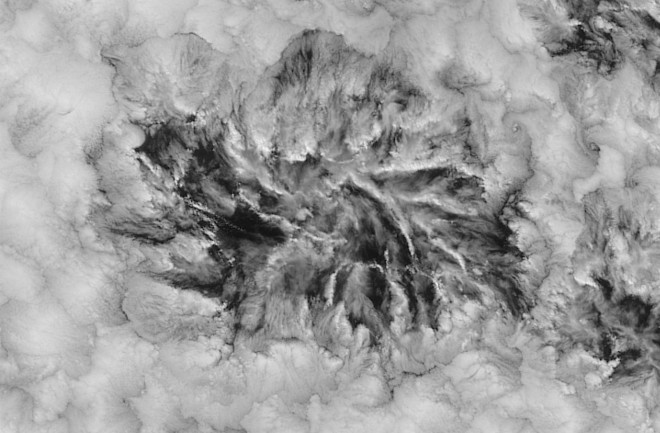 A cloud feature resembling a wagon wheel and known scientifically as an actinoform cloud is seen in this satellite image acquired on Nov. 16, 2021. (Credit: NOAA RAMSDIS)

Unless you routinely peruse weather satellite imagery, chances are you've never seen clouds aligned in a form like the one above. With spiral arms rotating around a central hub, it looks vaguely like a wagon wheel.

Cloud features like this, known as actinoform clouds, are just too big for us to make out their full form from the ground. Sometimes, in fact, they can stretch across 180 miles. But they are readily visible from space, typically in low stratocumulus cloud fields that are very common over the ocean.

Derived from the Greek word meaning “ray,” an actinoform cloud is actually a collection of smaller clouds that form a radial structure. Sometimes that structure looks a bit like spokes on a wheel. Other times it can take on leaf-like appearance, or rosettes.

What's Up With Those Shades of Green?

The video above consists of an animation of GOES-17 satellite images acquired in the infrared and near-infrared portions of the electromagnetic spectrum. Published originally by the Cooperative Institute for Meteorological Satellite Studies, it shows the actinoform cloud feature moving south-southwestard over the Pacific Ocean on Nov. 16, 2021.

The spiral bands consist of clouds boiling up in a process known as shallow convection. The shades of green in the false-color rendering of the scene help scientists discern what the clouds were made of. In this case, they were likely composed of a combination of ice particles and supercooled water droplets.

Actinoform clouds pop up off the western coast of Australia on Jan. 29, 2020, as seen by NASA's Aqua satellite. (Credit: NASA Earth Observatory)

Actinoform clouds were first identified in a 1962 satellite image acquired by the TIROS V satellite. They are known to last for up to 72 hours and are often associated with drizzle. But exactly how they form is not well understood.

For more great imagery and as well as additional details about these cloud features, check out this compilation of posts from the CIMSS satellite blog.

Watch as California Gets Bombed

The Home Planet as Seen From Space in 2022