Some Ex-Hurricanes Can Travel Across The Atlantic To Europe 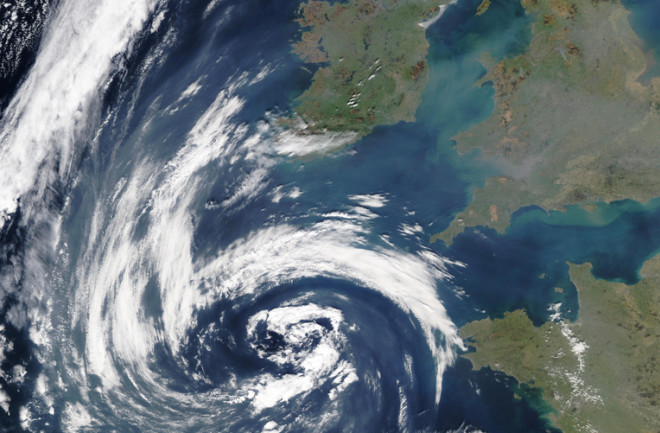 Atlantic hurricane season is typically mid-August to mid-October. They can wreak havoc across the Caribbean and North America. Recently, Hurricane Fiona ripped through Puerto Rico and made landfall in Nova Scotia, Canada — one of the strongest storms they have on record.

These ex-hurricanes, or storms without the core characteristics of a hurricane, occasionally also make their way toward Europe. And not until recently did we know why certain ex-hurricanes could cross the Atlantic, and others couldn't.

A new study published in the American Meteorological Society journal, Monthly Weather Review, reveals stronger hurricanes that are re-energized by jet streams are twice as likely to reach Europe. According to a press release, researchers have been analyzing hurricane data from 180 storms from the last 40 years, finding that stronger storms have the greatest potential to cross the Atlantic.

"Ex-hurricanes are fairly rare in Europe but can be deadly and destructive events, making it very important that we better understand why they arrive from across the ocean," says study lead Elliott Sainsbury, a Ph.D. researcher at the University of Reading, in a press release. "Our research shows stronger hurricanes, and hurricanes that are re-energized by the jet stream over the Atlantic, are far more likely to hit Europe. They seemingly retain some memory of their strength in the tropics."

When ex-hurricanes hit Europe, they can cause extreme winds and precipitation. And researchers also believe warmer waters due to climate change could be a contributing factor.

"We have now established this remarkably strong link with hurricane strength. As stronger hurricanes may become more frequent under climate change, we could also see more ex-hurricanes reaching Europe in the future. However, there are other factors to consider, and more research into this question is needed," says Sainsbury in a press release.

Some of the strongest storms on record in Europe are from ex-hurricanes, a press release says. It is common for Europe to be impacted by a cyclone — a storm formed over the South Pacific or the Indian Ocean — but roughly two ex-hurricanes reach Europe yearly, according to a press release. These storms typically hit between August and November during peak hurricane season.

One example was Hurricane Ophelia in 2017. It set wind speed records in Ireland, killing three people. Hurricane Katia in 2011 caused over $100 million (over £100 million) in damages to Scotland.

6 Feet Of Snow In Buffalo: What Causes Lake-Effect Storms Like This?

After The Storm Passes, Hurricanes Leave These Hidden Impacts Behind