Cryonicists hope that modern technology will one day bring frozen bodies back from the dead. But how realistic is a second life after a deep freeze? 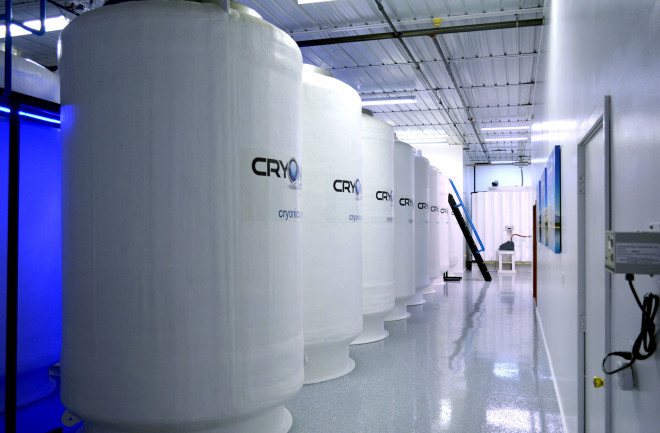 This article was originally published on April 6, 2021.

It’s said that one of the things that makes us human is our awareness of our own mortality, and for nearly as long as we’ve known that we’ll one day die, we’ve wondered about the possibility of waking back up. Stories about resurrection and immortality are found in countless religions and myths, and in recent years, many of these stories have hinged on the idea of cryonic preservation: freezing a body and then reanimating it in the future. If it worked for Han Solo, Captain America, and Fry from Futurama, why can’t it work for us?

“[For] most cryonicists, there’s two things you’ll find. We are sci-fi lovers, obviously. We’re also optimists,” says Dennis Kowalski, the president of the Cryonics Institute, a non-profit based in Michigan and one of a handful of companies worldwide offering its line of services.

That optimism is important, because cryonic preservation and reanimation is “100 percent not possible today,” according to Kowalski. But, he says, “we're not at the zenith of all of our knowledge right now, and we certainly have more to learn and to discover in the future.” Kowalski, a former paramedic, cites modern life-saving interventions like cardiac defibrillation and CPR as examples of how science can drastically change — for most of human history, people generally agreed that there’s no way to save someone whose heart has stopped. “And now,” he says, “it’s pretty darn routine.”

Based on that premise — that someday, science will find solutions to biological damage that’s irreparable by today’s standards — the aim of cryonics is to keep bodies in a stable, preserved state until the necessary medical technology arrives. Even to its staunchest adherents, cryonics isn’t a guarantee; Kowalski describes it as “an ambulance ride to a future hospital that may or may not exist.” But he views the field as a sort of Pascal’s wager — we’re definitely going to die, so if there’s even an outside chance of prolonging life through cryonics, there’s nothing to lose and potentially a second lifetime to gain.

How the Cryonic Process Works

When someone who’s made arrangements to have their remains cryonically preserved is declared dead, a medical team cools the body with ice water and keeps the body’s tissues oxygenated using CPR and oxygen masks. The ice-cold body is put in a hermetically sealed container and flown to the cryonics facility. (A note on nomenclature — freezing a cadaver is cryonics, not cryogenics. Cryogenics is the science and engineering of super-low temperatures.)

At the cryonics facility, the team puts the body on a machine similar to a heart-lung bypass, circulating the blood and maintaining oxygenation. They pump in a vitrification solution that works like antifreeze to keep the body’s tissues from turning to ice crystals, in hopes of minimizing structural damage. Then, they slowly cool the body to -320 ℉ in a liquid nitrogen vapor chamber. Once it’s cold enough, the body is transferred to a Thermos-like tank of liquid nitrogen, where it’ll stay for the foreseeable future. The patrons’ fees (around $28,000 per person) maintain the institute’s endowment to keep the organization running in perpetuity.

The bodies will wait in these tanks until medical technology (hopefully) is able to revive them. Kowalski says there are three challenges for this future tech to overcome: it’ll need to repair the damage done by freezing, cure whatever ailment originally killed the subject, and reverse the aging process so that the subject has a young, healthy body to enjoy in their second go-round. No one knows what that technology might look like; Kowalski’s best guess is tissue engineering and molecular nanotechnology that will be able to repair and replace damaged tissues.

Kowalski and his fellow proponents of cryonics recognize that it’s a tall order. But if you ask most cryobiologists — scientists who study the effects of freezing temperatures on living tissues for procedures like in vitro fertilization, stem cell therapy, and organ transplantation — about cryonics, they’ll just shake their heads.

What Could Go Wrong

“There is absolutely no current way, no proven scientific way, to actually freeze a whole human down to that temperature without completely destroying — and I mean obliterating — the tissue,” says Shannon Tessier, a cryobiologist with Harvard University and Massachusetts General Hospital. When scientists attempt to freeze a sample of living human tissue, like a slice of liver, “the tissue is completely obliterated, the cell membrane is completely destroyed. So there's actually no proof that you're preserving anything, and that's because the science is just not there yet.”

There are animals that can survive being frozen and thawed, like Canadian wood frogs, but these organisms have evolved specifically to handle the pressures of freezing temperatures in a way that our bodies simply haven’t. Tessier says it’s hard to imagine how our tissues could even withstand the process of being rewarmed, even with the benefit of a few centuries of scientific advances. “We did an experiment in the lab, a couple of years ago. We tried to vitrify a porcine heart, a whole pig heart. And, of course, the technology currently does not exist to rewarm the heart fast enough and, literally, the whole heart cracked in half.”

The ability of our tissues to physically withstand freezing and thawing is just the beginning, says John Baust, a cryobiologist at Binghamton University, SUNY. When our tissues are chilled, the part that freezes is mostly pure water — the cells, salts, and organic materials making up our fluids are excluded. The left-behind cells undergo severe molecular stress. “There are genetic changes that occur,” says Baust, “that say to the cell, ‘Die.’” These instructions for cell death, called apoptosis, start well before freezing temperatures are reached.

“For those of us who work in the area of freezing biological materials — mammalian cells, tissues, we’ve tried organs, and so forth — there's just insurmountable problems,” says Baust.

Cryonicists like Kowalski are well-aware of these criticisms. He argues that while these problems are insurmountable to us today, they may well be solvable in the future. It’s a point that’s definitionally impossible to rule out — almost like definitively proving that there’s no such thing as unicorns. “I don't think anyone really can deny what the future might hold,” says Baust. “I don't have all the answers. But I think skepticism is very reasonable.”

Beyond arguments of what’s possible, or might be possible in the future, there lingers another question: even if you could be brought back, would you even want to? After all, you’d be stranded in a strange world, separated from everything that made your life worth living in the first place.

Anders Sandberg, a philosopher at the University of Oxford’s Future of Humanity Institute, likens the prospect of revival to being “a temporal refugee — you can’t survive in the present, your only chance is to kind of exile in a foreign land.” But for Sandberg, an advocate of cryonics who every day wears a medallion inscribed with his cryonic instructions, “Life is worth living. I really enjoy being alive. As long as that is true, I want to try to hang around. But it's of course a gamble.”

“You have nothing to lose, everything to gain. Other than some life insurance money. And for me, it's worth it. It gives me peace of mind,” says Kowalski, who is signed up for cryonic preservation along with his wife and sons. “Even if it doesn’t work, we’re still advancing science, figuring out what doesn’t work. And if it does work, oh my God, we just stumbled across a cure for death, at least temporarily.”