Scientists Chronicle the Shifting Colors of a Comet's 'Seasons'

The Rosetta mission found a regular pattern of varying red and blue hues on the comet as it passed near to and then away from the sun. 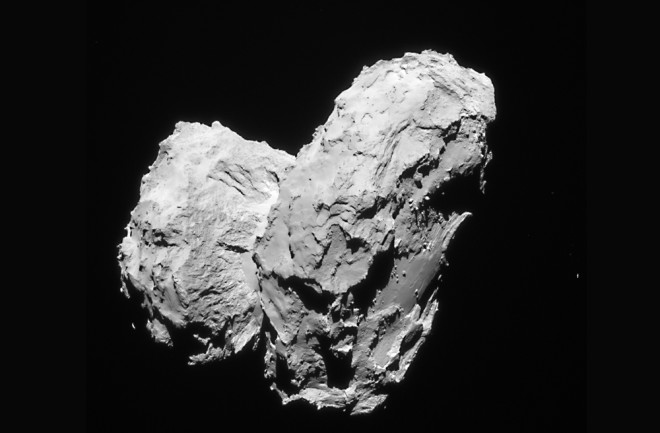 The European Space Agency’s Rosetta spacecraft was the first to orbit a comet when it circled Comet 67P/Churyumov-Gerasimenko from 2014 to 2016. Rosetta’s up-close look at 67P has given scientists an unprecedented chance to understand what these small, icy worlds are like.

Now, a team of researchers has unlocked another one of the comet’s secrets. As the comet zooms around the sun, clouds of gas and dust billow and settle, surrounding the comet in a haze of shifting colors visible to telescopes.

Different parts of the comet tend to reflect different colors of light depending on where the comet is in its orbit, and the researchers have figured out that seasonal cycles of dust and ice on the comet are causing these color changes.

The researchers presented their findings in a paper published Wednesday in Nature.

The team of researchers, led by Gianrico Filacchione of the National Institute for Astrophysics (INAF) in Italy, analyzed observations of Comet 67P from Rosetta’s VIRTIS instrument. VIRTIS measured the light the comet reflected in various colors, letting scientists puzzle out what chemical compounds are inside.

The researchers looked at more than a year of data from VIRTIS and found that the wavelengths, or colors, of light the comet reflected changed as the comet got closer to and then farther from the sun.

Cycles of Ice and Dust

With careful analysis and computer simulations, the researchers deduced that the color changes all came down to dust and ice. Water-ice tends to reflect bluer light, while dust grains made of carbon and organic compounds reflect more reddish light.

As the comet approached the sun in its orbit, the sun’s rays heated the comet and lifted lots of dust grains off of the comet’s surface and into the coma. This made the coma appear redder, while removing dust from the nucleus revealed more ice on its surface, making the nucleus look bluer.

The process flipped when the comet was in the part of its orbit that took it farther from the sun: Dust settled back onto the nucleus, making the nucleus look redder. And the particles lifted off the nucleus in this part of the orbit tended to be richer in water-ice, making the coma look bluer.

Capturing these simultaneous changes in both the coma and nucleus of Comet 67P would not have been possible with observations from Earth, Filacchione wrote in an email. But by sending a spacecraft to the vantage point of the comet's orbit, scientists have gained a clearer picture than ever before of this icy world.