Keep that in mind the next time you hear about an asteroid that is passing ‘close’ to Earth. 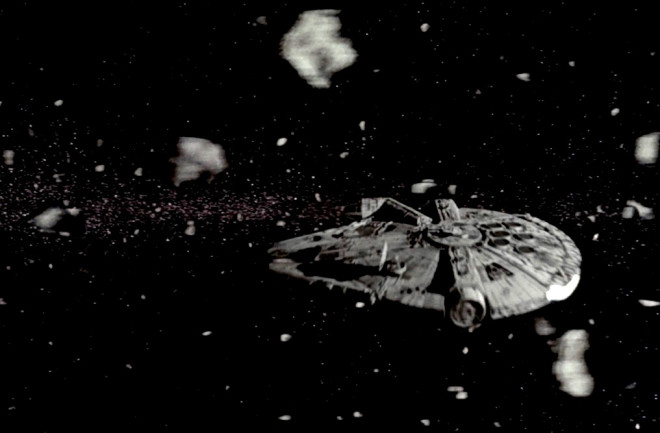 An asteroid field, according to the "Star Wars" movies. In reality, asteroid belts are mostly a whole lot of nothingness. (Credit: Lucasfilm)

A 2-kilometer-wide asteroid named 1998 OR2 just flew past Earth, driving home one of the most enduring space myths: that the solar system is a crowded place, packed with flying rocks that constantly menace our planet. This past week, many scientists and science journalists (including myself) on Twitter were bombarded with anxious questions from people who had embraced that myth. They were concerned that the menace had arrived in the form of 1998 OR2, a doomsday rock about to hit us.

I understand why people worry, though. For decades, we've all been immersed in movies, TV shows and comic books that depict a crowded version of space. The "asteroid field" featured in The Empire Strikes Back (shown up above) is a prime example. A very similar asteroid swarm pops up in the new series, Star Trek: Discovery. This kind of astronomical falsehood is practically essential for science fiction storytelling. Who wants to watch characters sailing uneventfully through seemingly endless stretches of empty space?

The need for recognizable, tangible drama is equally obvious in the stories pushed out by the tabloids (the U.K.'s Express is a regular offender), but it influences the language of more reputable outlets as well. "This giant asteroid will fly by Earth," explained CNN in its headline. Veteran BBC journalist John Simpson described the asteroid's trajectory as "a near miss."

NASA is not immune, either. Its headline ("Asteroid 1998 OR2 to Safely Fly Past Earth This Week") emphasized the lack of danger, but again gave a false sense of proximity. If you were reading carefully, you probably noticed that I did the exact same thing in the first sentence of this story. I wrote that the asteroid "flew past Earth," but the asteroid never came closer than 6.3 million km from Earth. When something is 6.3 million km away, does that really deserve to be called "flying past"?

Part of the problem is that we have no familiar language or imagery with which to describe the unbounded emptiness of space. Kilometers and miles give us numbers to work with, but they lack context. When I say 6.3 million km — that's just 4 percent of the distance to the sun, so it's pretty close, right? Or it's 15 times the distance to the moon, so it's pretty far, right?

Here's an idea that might help: Try thinking about distances in space not in terms of absolute measures like kilometers, but in terms of relevant units of size. If you are trying to picture the distance to something that is approaching Earth, think of it in Earth diameters. How far is 6.3 million km? It's about 500 Earth diameters.

The minimum distance between Earth and 1998 OR2, shown to scale. Earth is the dot at left. The asteroid is represented by the smaller dot at right. I circled them both to make them visible. (Credit: C. S. Powell)

Now you have some visual grounding to work with. Here is Earth. There, 500 Earth diameters away, is 1998 OR2. I made a very simple graphical representation of that geometry, above. I drew an image box 1,000 pixels wide. I drew Earth (at left) 2 pixels wide. I drew 1998 OR2 at right, 500 Earth diameters away. You'll notice that it doesn't look much like a scene from Star Wars. Unless you blow up the image, you may not be able to see the dots; I had to circle them to make them noticeable. That is how empty space is.

(Strictly speaking, my illustration still overstates how crowded space is. If I drew 1998 OR2 to scale, you wouldn't be able to see it at all. In the illustration, I had to make it 1 pixel wide so it would show up. It should actually be about 1/7,000 of a pixel wide.)

With this kind of context, you can also translate the "flyby" of 1998 OR2 into human terms. A person is roughly 2 meters tall. If there's another person 500 human heights from you, that puts her about 1 km away. I don't know about you, but if the the nearest person on Earth were 1 km away, I wouldn't consider that close at all. I certainly wouldn't worry that she might be about to bump into me.

Several concerned folks on Twitter asked me if 1998 OR2 could change course slightly and hit us. The answer is simple and absolute: No! No more than that woman who is 1 km away could suddenly teleport and knock you off your feet. Once you have a sense of relative scale, the magnitude of the risk becomes more intuitively evident.

This unit-measure way of thinking is also a useful way to comprehend the way the universe is organized on different scales. The moon is about 60 Earth diameters from Earth. The Earth is about 110 sun diameters from the sun. But look at the distance between the sun and the next star system. Alpha Centauri is about 30 million sun diameters away.

There's a lot of empty space within the solar system, but it is nothing compared with the emptiness between the stars. We will never, ever witness two stars collide in our part of the galaxy. They are simply too small and too far apart from each other.

On the other hand, galaxies are quite large relative to their separations. The Milky Way has two satellite galaxies, the Magellanic Clouds, that are only a single Milky Way diameter distant. Our large neighboring galaxy, Andromeda, is less than 20 Milky Way diameters away. No surprise, then, that astronomers routinely observe galaxies in the process of colliding with each other. The Milky Way and Andromeda are on such a collision course, though it will take another 4 billion years for it to unfold.

My unit-measure way of thinking has two major limitations, though I think those limitations are themselves illuminating.

First of all, despite the staggering emptiness of space, collisions really do happen. An asteroid helped wipe out the ancient dinosaurs 65 million years ago. A much smaller asteroid shattered windows and injured more than 1,000 people in Chelyabinsk, Russia, seven years ago. Comet fragments crashed into Jupiter in 1994, and comet chunks rain down on the sun pretty much every day. Every meteor that you see is a little collision.

A comet streaking into the Sun, captured by the space-based Solar and Heliospheric Observatory (SOHO) in August, 2019. (Credit: ESA/NASA/SOHO, Karl Battams)

It's therefore not at all foolish to worry about cosmic impacts. It's quite prudent, so long as you modulate your concern to match the true nature and magnitude of the risk.

The second limitation is more personal. Thinking about the emptiness of space can be emotionally taxing, and ultimately overwhelming if you internalize it too much. The responses to COVID-19 isolation show how dependent we humans are on proximity and physical interaction, and how devastating loneliness can be. Our brains are not naturally attuned to the disorienting nothingness that dominates at astronomical scales.

Sooner or later, the mind has to turn away. It either begins once again to personalize space, imagining it more crowded and social than it truly is, or it flees back to the comfort of human realm, grateful for its intimacy. Either way, though, an excursion into the great expanse is one well worth taking.