What’s the Difference Between Dark Matter and Dark Energy?

Our universe is dominated by mysterious and invisible forms of matter and energy that have yet to be fully (or adequately) understood. 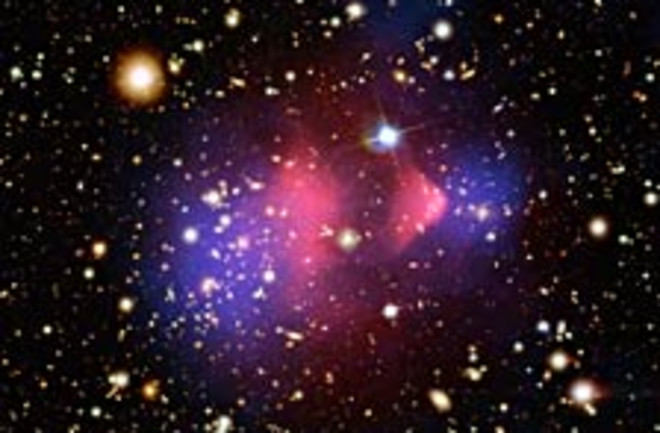 Most of our universe is hidden in plain sight. Though we can’t see or touch it, most astronomers say the majority of the cosmos consists of dark matter and dark energy. But what is this mysterious, invisible stuff that surrounds us? And what’s the difference between dark energy and dark matter? In short, dark matter slows down the expansion of the universe, while dark energy speeds it up.

Dark matter works like an attractive force — a kind of cosmic cement that holds our universe together. This is because dark matter does interact with gravity, but it doesn’t reflect, absorb or emit light. Meanwhile, dark energy is a repulsive force — a sort of anti-gravity — that drives the universe’s ever-accelerating expansion.

Dark energy is the far more dominant force of the two, accounting for roughly 68 percent of the universe’s total mass and energy. Dark matter makes up 27 percent. And the rest — a measly 5 percent — is all the regular matter we see and interact with every day.

Dark matter cannot be photographed, but researchers can detect it and map it by measuring gravitational lensing. Its distribution is shown here in the blue overlay of the inner region of Abell 1689, a cluster of galaxies 2.2 billion light-years away. (Credit: NASA/ESA/JPL-Caltech/Yale/CNRS)

In the 1930s, Swiss-born astronomer Fritz Zwicky studied images of the roughly 1,000 galaxies that make up the Coma Cluster — and he spotted something funny about their behavior. The galaxies moved so fast that they should simply fly apart. He speculated that some kind of “dark matter” held them together.

Decades later, astronomers Vera Rubin and Kent Ford found a similar phenomenon when they studied the rotation rates of individual galaxies. The stars at a galaxy’s outer edge should circle slower than stars near the center. That’s the way planets in our solar system orbit. Instead, they noticed that the stars on a galaxy’s outskirts orbit just as fast — or faster — than the stars closer in. Rubin and Ford had found more evidence that some invisible form of matter is apparently holding the universe together.

“Even stars at the periphery are orbiting at high velocities,” Rubin once explained in an interview with Discover. “There has to be a lot of mass to make the stars orbit so rapidly, but we can’t see it. We call this invisible mass dark matter.”

Astronomers now have many other lines of evidence that suggest dark matter is real. In fact, the existence of dark matter is so widely accepted that it’s part of the so-called standard model of cosmology, which forms the foundation of how scientists understand the universe’s birth and evolution. Without it, we can’t explain how we got here.

A wide view of the local universe, spanning hundreds of millions of light-years, reveals the clumped and weblike structure of the cosmos, with strands of galaxies and immense voids. The Milky Way is just one of many points that make up the Virgo Supercluster. Rather than just empty, passive spaces, voids may hold clues to understanding dark matter, dark energy and galactic evolution. (Credit: Andrew Z. Colvin)

But that lofty status puts pressure on cosmologists to find definitive proof that dark matter exists and that their model of the universe is correct. For decades, physicists all over the world have employed increasingly high-tech instruments to try and detect dark matter. So far, they’ve found no signs of it.

Read More: As the Hunt Drags Out, Physicists Start Searching for the Lightest Dark Matter

Astronomers have known that our universe is expanding for about a century now. Telescopic observations have shown that most galaxies are moving away from each other, which implies the galaxies were closer together in the distant past. As a result, the evidence piled up for the Big Bang. However, astronomers assumed that the combined gravitational pull of all the cosmos’ stars and galaxies should be slowing down the universe’s expansion. Perhaps it would even someday collapse back in on itself in a Big Crunch.

That notion was thrown out in the late 1990s, however, when two teams of astronomers spotted something that didn’t make any sense. Researchers studying supernovas in the the most distant galaxies discovered that distant galaxies were moving away from us faster than nearby galaxies. The universe wasn’t just expanding — the expansion was speeding up.

“My own reaction is somewhere between amazement and horror,“ astronomer Brian Schmidt, who led one of the two teams, told The New York Times in 1998. “Amazement, because I just did not expect this result, and horror in knowing that it will likely be disbelieved by a majority of astronomers — who, like myself, are extremely skeptical of the unexpected.“

But rather than refute it, subsequent observations have only made the evidence for dark energy more robust. In fact, some prominent critics of dark matter still accept the existence of dark energy.

Read More: How Will the Universe End?

Now, that doesn’t mean researchers know what dark energy is. Far from it. But they can describe its role in the universe, thanks to Albert Einstein’s theory of general relativity. Einstein didn’t know about dark energy, but his equations suggested new space can come into existence. And he also included a fudge factor in relativity called the cosmological constant, which he added — and later regretted — to keep the universe from collapsing inward. This idea allows space itself to have energy. However, scientists have still never actually seen this force on Earth.

Some theoretical physicists think there’s an entire dark realm of particles and forces out there, just waiting to be discovered. Whatever dark energy and dark matter are made of, they seem to be playing tug-of-war with our universe — both holding it together and pulling it apart.